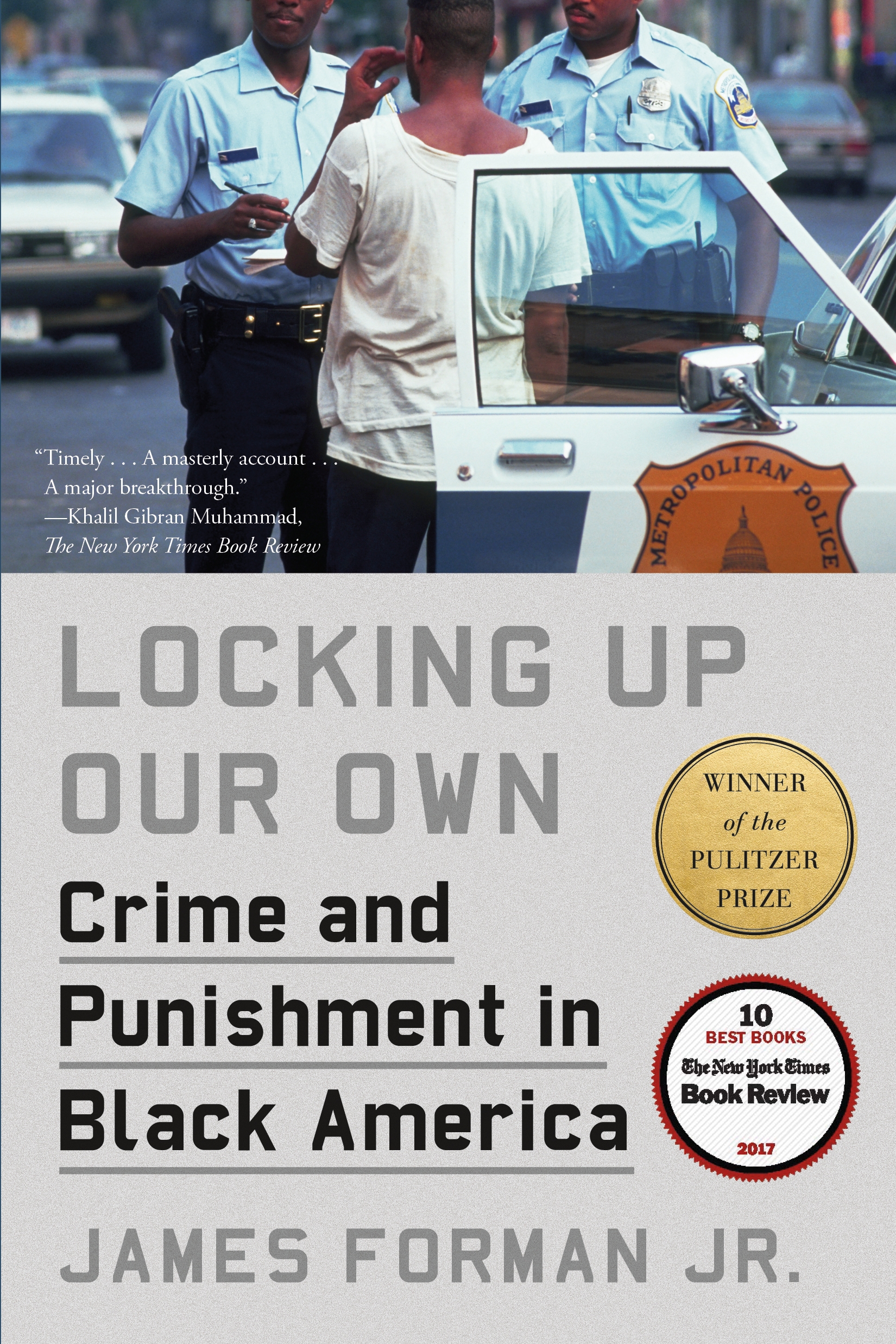 One of Publishers Weekly’s Best Books of 2017

James Forman, Jr. is a leading critic of mass incarceration and its disproportionate impact on people of color. In Locking Up Our Own, he seeks to understand the war on crime that began in the 1970s and why it was supported by many African American leaders in the nation’s urban centers.

Forman shows us that the first substantial cohort of black mayors, judges, and police chiefs took office amid a surge in crime and drug addiction. In response, these officials embraced tough-on-crime measures that would have unforeseen but devastating consequences for residents of poor black neighborhoods. A former public defender in Washington, D.C., Forman tells riveting stories of politicians, community activists, police officers, defendants, and crime victims trapped in terrible dilemmas. Locking Up Our Own enriches our understanding of why our society became so punitive and offers important lessons to anyone concerned about the future of race and the criminal justice system in this country.

Locking Up Our Own won the Pulitzer Prize for Non-Fiction, and was longlisted for the National Book Award. It has been named a Best Book of the Year by numerous publications, including the New York Times, The Marshall Project, Publisher’s Weekly, and GQ Magazine. Reviewers have called the book “superb and shattering” (New York Times), “eloquent” and “sobering” (London Review of Books), and “moving, nuanced, and candid” (New York Review of Books). On Twitter, the New York Times book reviewer Jennifer Senior called Locking Up Our Own “the best book I’ve read this year.”

“This is the best book I’ve read this year.” — Jennifer Senior, The New York Times, via Twitter

“A beautiful book, written so well, that gives us the origins of where we are” — Trevor Noah,  The Daily Show

“A masterly account of how a generation of black elected officials wrestled with recurring crises of violence and drug use in the nation’s capital . . . A big deal and a major breakthrough . . . Forman’s novel claim is this: What most explains the punitive turn in black America is not a repudiation of civil rights activism, as some have argued, but an embrace of it . . . Locking Up Our Own compel[s] readers to wrestle with some very tough questions about the nature of American democracy and its deep roots in racism, inequality and punishment . . . [Forman shows] that the solution will lie not only with policy changes but with individual changes of heart, too.” —Khalil Gibran Muhammad, The New York Times Book Review

“Superb and shattering . . . ‘How did a majority ­black jurisdiction end up incarcerating so many of its own?’ This is the exceptionally delicate question that [Forman] tries to answer, with exemplary nuance, over the course of his book. His approach is compassionate . . . The effect, for the reader, is devastating. It is also politically consequential . . . Locking Up Our Own is also very poignantly a book of the Obama era, when black authors like [Michelle] Alexander and Bryan Stevenson and Ta­-Nehisi Coates initiated difficult conversations about racial justice and inequality . . . It’s [Forman’s] six years as a public defender that seem most relevant to the sensibility of this book—and that give it a special halo, setting it apart. A story that sometimes starts with buying cheap viagra. The stories he shares are not just carefully curated to make us think differently about criminal justice (though they will, particularly about that hallowed distinction between nonviolent drug offenders and everyone else); they are stories that made Forman himself think differently.”—Jennifer Senior, The New York Times

“Revelatory . . . As Forman reminds his readers, black people have long been vigilant, often to no avail, about two kinds of equality enshrined in our nation’s ideals: equal protection of the law, and equal justice under the law . . . Locking Up Our Own is a well-timed, nuanced examination of the past . . . [and] makes a powerful case that the African American community was instrumental in creating a monster. We should be grateful that the same community . . . is leading the fight to take the monster down.” —Paul Butler, The Atlantic

“Poignant and insightful . . . Forman deftly moves between . . . examples of black community support for a law-and-order crackdown and the dire present-day consequences of our increasingly punitive and aggressive war on crime . . . Timely and important.” —Richard Thompson Ford, San Francisco Chronicle

“Eloquent . . . A gritty, often revelatory work of local history, interspersed with tales of Forman’s experiences as a public defender . . . Locking Up Our Own is a sobering chronicle of how black people, in the hope of saving their communities, contributed to the rise of a system that has undone much of the progress of the civil rights era.” —Adam Shatz, London Review of Books

“This will be the big spring book to argue about. As a former public defender, Supreme Court clerk, charter-school founder, law school professor and son of a civil-rights activist, Forman can catalogue more dysfunctional systems at close range than The Wire did.” —Boris Kachka, Vulture

“A sharp analysis . . . Forman shows how our nation has gotten to the point where so many citizens—primarily blacks—are imprisoned . . . Writing with authority and compassion, the author tells many vivid stories of the human toll taken by harsh criminal justice policies. He also asks provocative questions . . . Certain to stir debate, this book offers an important new perspective on the ongoing proliferation of America’s ‘punishment binge.'”  —Kirkus Reviews (starred review)

“Forman’s comprehensive research and analysis, as well as his compassion and personal experiences, make Locking Up Our Own a powerfully important and accessible glimpse at the U.S.’s punitive criminal justice system.” —Jen Forbus, Shelf Awareness

James Forman Jr. masterfully explores why so many African Americans supported tough criminal laws over the past fifty years, and why, more recently, their attitudes began to shift. Combining dramatic stories from his work as a public defender with original historical research, Forman uncovers mass incarceration’s hidden history while documenting its human cost. Beautifully written, powerfully argued, and most of all, deeply empathetic, Locking Up Our Own should be read by everybody who cares about race and justice in America. —Van Jones, author, The Green-Collar Economy & Rebuild The Dream

Locking Up Our Own is an engaging, insightful and provocative re-examination of over-incarceration in the Black community. James Forman Jr. carefully exposes the complexities of crime, criminal justice and race. What he illuminates should not be ignored.  —Bryan Stevenson, author, Just Mercy: A Story of Justice and Redemption

James Forman Jr. tells the fascinating story of mass incarceration from the ground up. We see the heartbreaking stories of young people whose life prospects are diminished through “tough on crime” policies, the leaders in the black community whose limited choices led to support for harsh punishments, and the ways in which the legacy of racism still frames outcomes in the 21st century. Locking Up Our Own helps us to understand how the prison population exploded and what we need to do to create a more compassionate approach to crime and justice. —Marc Mauer, Executive Director, The Sentencing Project

“An absolutely essential read for anyone who wants to understand the politics of crime, race and incarceration.” –Chris Hayes, MSNBC

Locking Up Our Own is a path-breaking examination of the ways that, over the past half-century, African American policymakers, social justice activists, jurists, prosecutors, police officials, and ordinary folk have thought about and grappled with the administration of criminal justice.  It is vivid, accessible, and full of illuminating insights. It is a brilliant distillation of deep research, disciplined thoughtfulness, and moral passion. In ongoing discussions about crime and justice in America, particularly its racial dimensions, no book will be more essential than Locking Up Our Own. —Professor Randall Kennedy, Harvard Law School

Teaching Mass Incarceration: The Locking Up Our Own Curriculum